At Berber camp Merzouga we organize Marrakech to Merzouga 10 days desert trip which is most famous desert actibvity sold from Casablanca You will pass by the high atlas mountains, Ait ben haddou Kasbah and spend a night in merzouga desert.

Casablanca The best 10-day desert tour in Marrakech begins with your arrival at Casablanca airport, where we pick you up and transfer you to Casablanca and then to Rabat, the capital of Morocco. In Casablanca, admire the Hassan II Mosque, the largest mosque before Mecca, and discover the Cornish coast. Then travel to Rabat. Here you will visit the Hassan Tower and the Kasbah Udaya before moving on to your riad in the medina. Accommodation at the riad includes a bed and breakfast.

On Day 2 of the Best 10-Day Tour, after breakfast at your riad, you will start your journey to Fes via Meknes and Volubilis. In Meknes, another important royal city of Morocco known as the capital of the Ismailites, you can admire the famous Bab Mansour Gate, the Sahrij Souani reservoir, and the mausoleum of Moulay Ismail. After lunch, you will continue to the Roman city of Volubilis, where you will have the opportunity to see beautifully preserved original mosaics, a Roman street, and a map of the city. On the way through the Moroccan countryside, we pass the holy town of Moulay Idriss where you can take photos. We arrive in Fez late in the evening and stay overnight in our riad in the medina. Overnight stay at the riad. Casablanca 10 days fez and desert best tour.

In this day, you will have breakfast in your riad and then set off to explore the medina and see the many hidden treasures only the locals know about. Fes has been the capital of Morocco for over 350 years and is home to Al-Qarawin University, the oldest active university in the world. A guided tour takes you to the mausoleum of Moulay Idriss, the Nejarin Fountains, and the tanneries. After lunch, you will visit the grounds of the Royal Palace and stroll through the famous Jewish quarter “la Mellah”, where you will have the opportunity to visit one of the few remaining synagogues in Morocco. The tour of Fes includes a short visit to the famous ceramics factory, after which you can enjoy a magnificent panoramic view over the entire medina of Fes. In the afternoon, visit the new town for an aperitif. Overnight stay in your riad. Casablanca 10-day tour with a visit to Fez and the desert.

After breakfast in your riad, you will drive southeast along the caravan roads to Merzouga. During this journey you will discover the mountains of the Middle and High Atlas. Stop at the Cedar Forest, the largest in Morocco, above the mountains of the Middle Atlas, where you are likely to see Barbary macaws. After lunch in Midelt, continue through the open desert and watch the landscape change to show a hint of desert towards the town of Errachidia. The drive continues through the lush Ziz valley and the palm grove of Tafilalet, famous for the cultivation of dates. This region is the cradle of the Alawite dynasty, the current royal family of Morocco. In the late afternoon we arrive in Merzouga, where we are greeted with a glass of mint tea before spending the night in our riad. Half board.

After breakfast in the riad, depart for a tour of the region. You will visit the Gnawa people, the original slaves from Sudan, and learn about their music and way of life. You will also visit the Rissani Bazaar, a traditional town that was the birthplace of the Moroccan ruling family and a meeting place for trade caravans on their way to Timbuktu in Mali. Here you will see many hooded men and women in veils. After returning to Merzouga village to rest, you will go on a camel ride in the afternoon with an experienced camel guided to explore the sandy sea of Merzouga. Overnight at our camp in the desert.

Early in the morning you will be awakened by your camel guide to witness perhaps the most beautiful sunrise of your life. You will return to the village of Merzuga. Along the way, you won’t miss the unique beauty of the spectacular Erg Chebbi sand dunes, which change throughout the day. After breakfast and a shower in your riad, you will head to the Rissani, Tinghir and Todga Gorges, the highest and narrowest in Morocco. After lunch in the heart of the gorges, you will cross the Dades valley where you can admire the majestic sandcastles and the incredible rock formations known as ‘monkey fingers’. Accommodation in a luxury guest house overlooking the Dades Valley.

After breakfast we will drive through the Dades Valley to Kalaat M’Gouna and Ouarzazate. The road through the Dades valley is the road of a thousand kasbahs, offering many opportunities to take some of the best photos of the trip. In Kalaat M’Gouna, the ‘city of roses’, we stop to buy rose water that will keep your laundry smelling nice even after the trip is over. We continue on to Marrakech via the Kasbah of Ait Benhaddou. The Kasbah was built by Et’Hami El Glaoui, one of the last Berber chiefs of the 18th century, and is now home to many Glaouis. The journey continues through the majestic Tizi n’Tichka Pass (2260m) in the High Atlas Mountains before heading to Marrakech where you stay in one of the riads in the medina.

After breakfast in the morning, you will be given a guided tour of Marrakech, the ‘red city of Morocco’. Your guide will show you all the historical and cultural sites, including the Koutoubia Minaret, Saadian tombs, the magnificent Bahia Palace and Ben Youssef Madrasa. End your morning with a stroll through the narrow streets of the medina and admire the various artisans before reaching the famous Jamaa al-Fna Square. Lunch at a restaurant near the square. In the afternoon, visit the Majorelle Gardens and tour Gueliz, the new town of Marrakech. After dinner you will have the opportunity to stroll around the square where you will be entertained by magicians, storytellers, psychics and food vendors. You will spend the night in your riad.

After breakfast in your riad, drive to the coastal city of Essaouira. After a 2.5 hour drive you can start exploring the city. You’ll visit the fortress of the Rock, see tuyas carved in wood by artisans, stroll through the narrow streets of the medina and admire hundreds of handicrafts. This ‘windy city’ attracts surfers from all over the world. Essaouira has survived many civilisations – including a Portuguese occupation which has influenced much of the architecture – but it remains a small city with a rich history. It is also known as the ‘Atlantic Pearl’ of Morocco because of its size and distinctive blue doors and washed-out walls. You will also visit the argan oil factory. This is where the oil, known for its culinary, cosmetic and medicinal properties, is extracted. Lunch will be cooked the Moroccan way: with fresh fish from the local fish market. In the afternoon, you will return to Marrakech. Overnight stay in your riad.

After breakfast at your riad, we will transfer you to Casablanca/Marrakech airport for your flight home. The tour ends at the airport, at the end of your 10-day desert tour of Grand Casablanca. 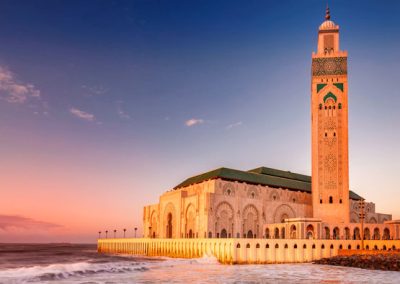 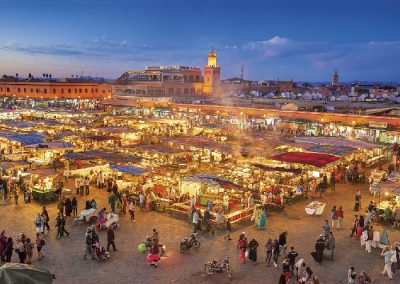 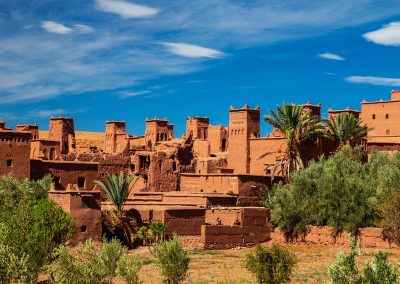 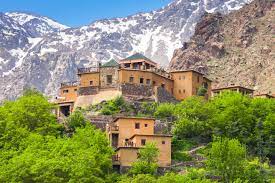 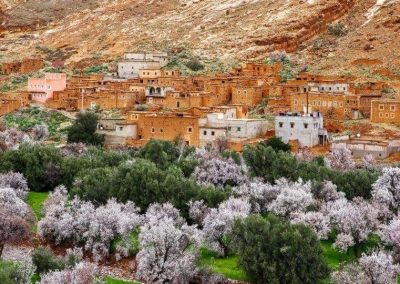 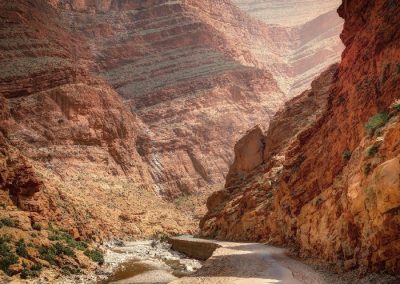 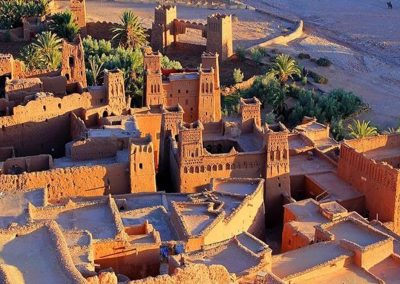 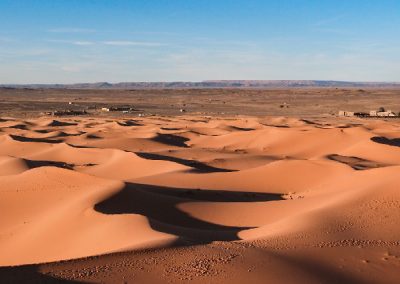 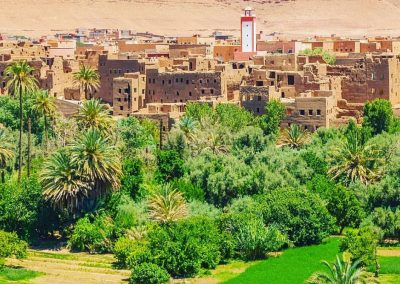 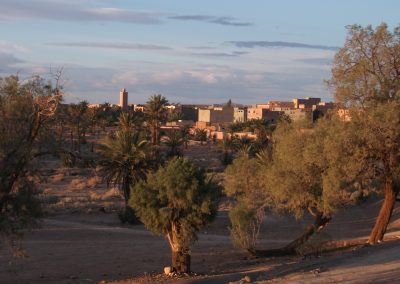 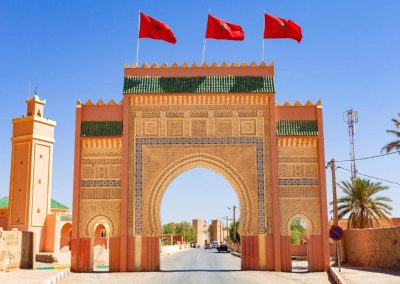 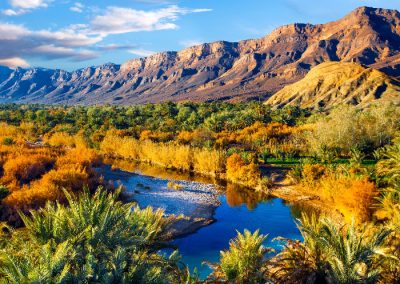 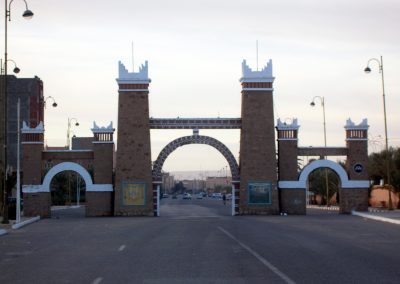 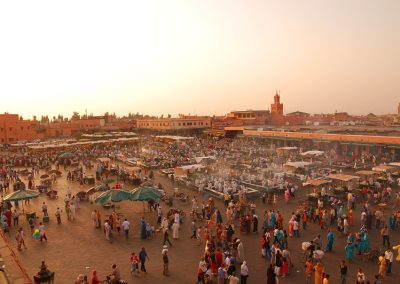